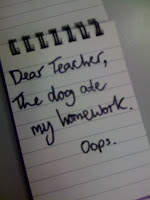 My apologies for the time gap between recent blogs.  I’m very late in posting the next blog so, just like the school student whose homework is late, I’ve brought a note.
I share the following 'Julia Farr update' with you because we value your feedback on the work we are doing, and because I want to assure you, the twelve hundred (and counting)  readers of Purple Orange, that there's much more blogging to come.
It has been an intense start to 2010 at Julia Farr group, and there has been little opportunity for reflection.  We have been active on a number of fronts.  In terms of policy work, our focus was on thinking through and amplifying the policy issues in the lead up to the SA state election in March.  Our focus has now shifted to the preparation of material that we hope will be helpful to several government ‘thinks’, including the senate enquiry into the planning and support needs of people living with disability as they age, the SA government’s reference to the Social Inclusion board for a blueprint for disability support, and the Productivity Commission’s work on the future funding of disability support (including considerations of a National Disability Insurance Scheme) and its recently announced public enquiry into Australia’s aged care system.
In terms of publications, we spent some time completing and releasing our latest publications, relating to the Tell Us survey and also an ‘access to GPs’ research report.
In terms of events, we have been heavily involved in two very successful 2-day workshops, one with UK’s Jenny Pitts and NZ’s Penny Hambleton on building personalised supports, and the other with US’s John O’Brien and Connie Lyle O’Brien on connecting into community.  We are also currently running this year’s Loop program, which has visited Adelaide and Mt Gambier so far, with other country venues still to come.  Other events are also in the pipeline.
In terms of research, we are currently developing a model of citizenhood support that I think will help people and agencies to focus on what really counts in people’s lives.  In addition we continue our work on the nature of safeguards and how agencies can move away from restrictive practices.  We have also recently launched the new, bigger and better Tell Us survey, which is going national.
We are also exploring what can assist school students living with disability to have better chances of a successful mainstream education, and one of the early results of this has been the emergence of a youth mentorship initiative, which we host.
We are also busy at the Julia Farr Housing Association, with a number of building projects underway, and where the principles of access and personal authority are always at the forefront of our mind.
And then there are the many daily transactions we have with people, partly because of the trust funds that we administer, partly because of our very busy conference venue, and partly because of our work convening the national movement called In Control Australia.

So it’s been a very busy time, especially given there are only seven staff at the Julia Farr group, three of whom are part-time.
BUT what this means is that there is heaps to blog about, so watch this space.
Posted by Robbi at 3:45 PM