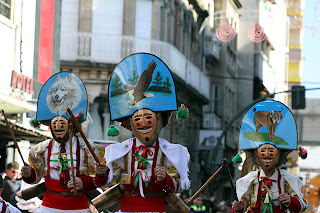 Now that the identity of the new Australian government has finally been resolved, I'm sorely tempted to break into a rendition of The Seekers' hit, 'The Carnival Is Over'.  It's been page-turning stuff, and we have been regularly reminded that the election has come down to handfuls of votes.  This has included some comments about the number of 'informal votes' that were cast, where some people showed up to vote but for whatever reason filled out their ballot paper in such a way that it could not be counted as a vote for any particular candidate.
But if the general election did indeed come down to mere handfuls of votes, has there been any focus on the 'lost' votes of people living with disability?  After all, there are a range of ways that a person might be thwarted in casting their vote.
Casting your vote is the moment when you make your view known.  It is when you have your say.  Unfortunately, it is not so easy to cast your vote if the polling booth is physically inaccessible.  Also, it is not easy to cast your vote if the moment of voting, when you put your mark against a candidate's name, is reliant on you being able to see the ballot sheet, read the words, and direct the pencil towards the box you wish to mark.  If you need any assistance with these, then there goes your privacy, which is not a good look given that this is meant to be a secret ballot. 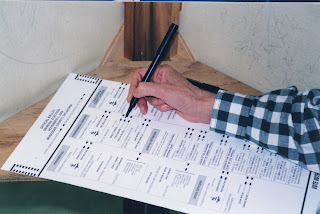 Of course, people can use a postal vote process so that they don't have to show up to their local polling booth, and that's a useful option, but it should not be the only option.  Every polling booth needs to be genuinely accessible.  It would not seem right if a person has to use a postal vote arrangement (or go somewhere else to cast a vote using special technology) merely because their local polling booth is inaccessible.
Accessing the local polling booth is important, and not just because of this principle of accessibility.  It is important because voting is one of the most valued, most fought for, and most defended, roles in society.  If we assign high value to the act of voting, then we assign high value to the person doing the voting.  Given that many people living with disability currently don't get a fair go in undertaking valued roles, it is critically important that a person has the option to attend their local polling station and cast their vote, and be seen to do so.  For this to be possible, all polling booths need to be accessible, both in terms of getting in the building and privately casting the vote.
And then there is the matter of enrolment.  I wonder how many adult Australians living with disability are not enrolled to vote because someone else has formed the view that there's no point because the person does not have the capacity to choose.  That's a big decision for someone to take and should not be taken lightly, because who knows for sure the degree of a person's capacity?  In the legislation, reference is made to people being "of unsound mind", but what exactly is an unsound mind and who gets to decide?  IQ scores have often been used as a guide to someone's intellectual capacity, and may even be a consideration to determine an 'unsound mind', but I don't see why a low IQ score should mean you don't get to vote.  Since when did you have to be smart to vote?
One way through this is to ensure that every young Australian, including young Australians living with disability, are automatically enrolled to vote once they reach the age of 18 years.  After all, voting is mandatory and an automatic enrolment will reduce the big rush from first-time voters to register once the Prime Minister has announced an election, many of whom miss out because there is hardly any time to enrol once the announcement is made.
Were Australia to introduce automatic enrolment, this would ensure that all young Australians living with disability are assigned the valued role of Voter, and it just might shift the focus towards how a person might best be supported to make their voting decision.  This might well take more effort than just deciding that the person doesn't have the capacity, but for our society's sake it is worth it.   In this way, we assume the capacity of everyone to cast their vote, which means we assume the capacity of everyone to make a contribution to their community, to belong. In our lives, there are many ways we might move towards a sense of our own contribution, our own value to our communities, our sense of belonging, but for every adult Australian the very first role assigned on reaching adulthood is the right to vote.  May we never understate the importance of this for Australians living with disability, regardless of what we imagine might be the extent of a person's capacity. 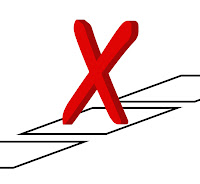 So, as is currently happening in South Australia, I hope that the Australian Electoral Commission reviews the process of the recent national elections, and examines how best to facilitate every Australian's right to vote.  Also, it would be very helpful, indeed vital, if there was a panel of Australians living with disability to advise the Commission on such matters.  Ditto each state and territory.

I can imagine there will be many people out there who might think there are bigger issues to deal with than this.  Why bang on about voting when some people can't even get reliable assistance to get out of bed in the morning?  This is an understandable view, but bear in mind the intensity of the post-election negotiations we have all just witnessed, where several 'independents' were able to advance a number of causes favourable to their local constituencies.  If we had a comprehensive set of arrangements in place that uphold the right of Australians living with disability to vote, then the next time there is a hung Parliament, it may just be that the focus of the negotiations includes the interests of voters living with disability.