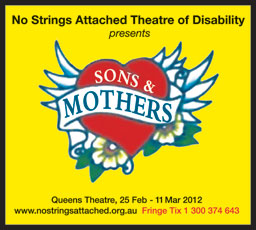 Sons and Mothers is the latest offering from the No Strings Attached Theatre Company. Part of the 2012 Adelaide Fringe Festival, the show explores the relationship between mother and son, through the lens of seven men. 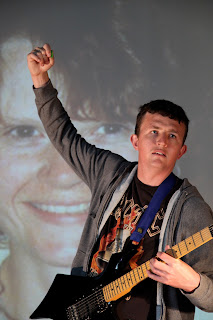 Devised and led by the creative Alirio Zavarce, the show opened its run on Saturday 25 February at Adelaide's Queens Theatre, a good location for this weighty, industrial scale topic. The weather had turned the venue into 'sauna theatre', and it would have been easy to be put off by the heat. However, like a Native American sweatlodge or a hot yoga class, the temperature added a dimension to the audience's relationship with the performance, a wrap of maternal closeness.

Six of the actors live with disability, and all bring a highly engaging presence to their performance, drawing on differing skills and perspective.  The effect is rich. There are moments of surprise - Ryan Rowland's heavy metal guitar riffs punctuating the story of his birth, and Damien Turbin's Olympian lap of honour in celebration of the son that he is; moments of edgy intensity, like Duncan Luke's instinctive self defence against taunts; moments of stillness, through Ben Wishart's quiet penmanship and Richard Sami's soft movements; and moments of poignancy like Kym Mackenzie’s experience of loss. 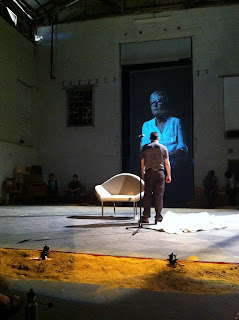 The live performance is spliced by large-scale video footage of actors’ mothers talking about their son.  This multimedia approach to the relationship is highly effective, with each actor appearing entirely unfazed by a 4 m high video image of his mother talking about his birth.

Each story in this performance has its own character, as unique as the relationship that every son has with his mother, and yet the stories work together to tell a collective tale, culminating in a final scene that tingles.

I felt grateful for the opportunity to experience these glimpses into the lives of these sons and their mothers.  It reminded me that a parent is often the fiercest campaigner for a person, there for the long haul, and whose commitment, whose stand, reflects the essence of parenthood. 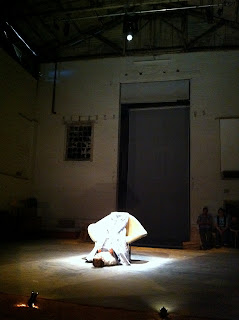 It also reminded me how boys grow into men, into a sense of their own identity.  In telling their stories, each paying homage to his mother, the actors also convey something strong about themselves and their voice in this world.

With performances through to 11 March 2012, you should go see this excellent production if you are a mother, or if you've ever had a mother.

WIN TICKETS
Purple Orange has three pairs of Sons and Mothers double passes* to give away. Email us at admin@juliafarr.org.au with your contact details.  Names go into a hat and we'll draw three winners at 4.30pm Friday 2 March (Adelaide time).  Read the conditions below.

*Prize is for the entrance fee only. for two persons.  Any other costs, including travel, are not part of the prize, and are therefore the prizewinners' responsibility.  By participating in this competition, you accept that JFA Purple Orange bears no liability for any other costs associated with use of the tickets, or for any costs associated with cancellation or postponement of performance, or for any other consequence arising from your use of the tickets.

Email ThisBlogThis!Share to TwitterShare to FacebookShare to Pinterest
Labels: Arts